Welcome to 100+ Years of Commercial Flight!

Just over 100 years ago, on January 1, 1914, a small plane lifted from the water in St. Petersburg’s downtown with just one passenger, launching the world’s first regularly scheduled commercial airline flight.
The idea of the airline was Percy Fansler’s.  Percy was an engineer from Jacksonville, Florida. His vision convinced a dozen St. Petersburg business men and the Board of Trade to invest in a commercial airline to fly from St. Petersburg to Tampa, just ten years after the Wright brothers’ first flight. The St. Petersburg-Tampa Airboat Line was born. 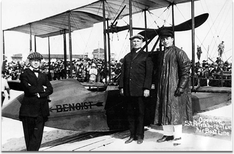 The first passenger, former St. Petersburg Mayor Abe Pheil, paid $400 at an auction for the flight to Tampa.  His pilot was the young aviation pioneer Tony Jannus.  The airline operated two scheduled roundtrips daily across Tampa Bay, Florida, with two bi-wing seaplanes called “Benoist Airboats.”  Regular one-way fare was $5.00
With average airspeeds of 60 mph, flight time between the Bay Cities was just 23 minutes – a fraction of the time required for the trip by car, rail or boat.  That first New Year’s Day flight heralded what we have since come to know as “The Birth of The Global Airline Industry.”
“The Airboat Line to Tampa will be only a forerunner of great activity along these lines in the near future…what was impossible yesterday is an accomplishment of today—while tomorrow heralds the unbelievable.”
Percy Fansler, St. Petersburg - Tampa Airboat Line, 1914
You are visitor number: